As predicted by zombie clock there has been a zombie outbreak in the UK in the town of Stote-on-Berk. This has been caused by a mutated version of the harmless Borriathum Orando Ballethius (B.O.B.) bacteria. This is a developing story. Spread the word and keep checking back for updates.

We have just recieved word that the entire town of Stote-on-Berk has been annihilated as a precautionary measure to contain the superBOB outbreak. All citizens have previously been evacuated. We now have word that the various world governments are making a concerted effort to suppress this story so as to not alarm the general populace. We believe they are even suppressing knowledge of the very existance of Stote-on-Berk. Please confirm this for yourselves by trying to find news of the town of the superBOB outbreak online. There may have been some areas of the internet they have missed.

Rest assured that zombie clock employed the very best in sophistocated science based computers that are immune from outside attempts at censorship. We will continue to report the TRUTH and will not compromise in this.

Was this the apocalypse the clock predicted?

Thanks to the hard work of science and some shady government agents this outbreak has been contained and has not turned into an official "doomsday event". We are currently reconfiguring zombie clock and replacing the various quantum components needs for operation. Check back soon, when we will have enough data to predict (with 110% accuracy) the next zombie outbreak.

It has been confirmed that the town has now been fully exacuated, most media crews have now pulled out and there are no longer any civilians in the vicinity. The mood on the ground is one of apprehension as word has been relayed that the town itself may be surgically destroyed to contain the outbreak. Whatever happens, one thing is sure: the fallout from this latest outbreak worldwide will be massive, we expect to see at least a 20% decline in buckfast consumption accross the UK

The United States of America responds

President Donald Trump has recently tweeted about the outbreak, offering his condolencies to the survivors and praying for a prompt return to normalcy. His tweet was promptly deleted, however the US ambassador to the UK echoed these sentiments and vowed that US citizens would be given training and advice about superBOB, the danger signs of an infection and how to deal with a user in the depths of a superBOB fuelled Buckfast binge.

Containing and redacting the threat 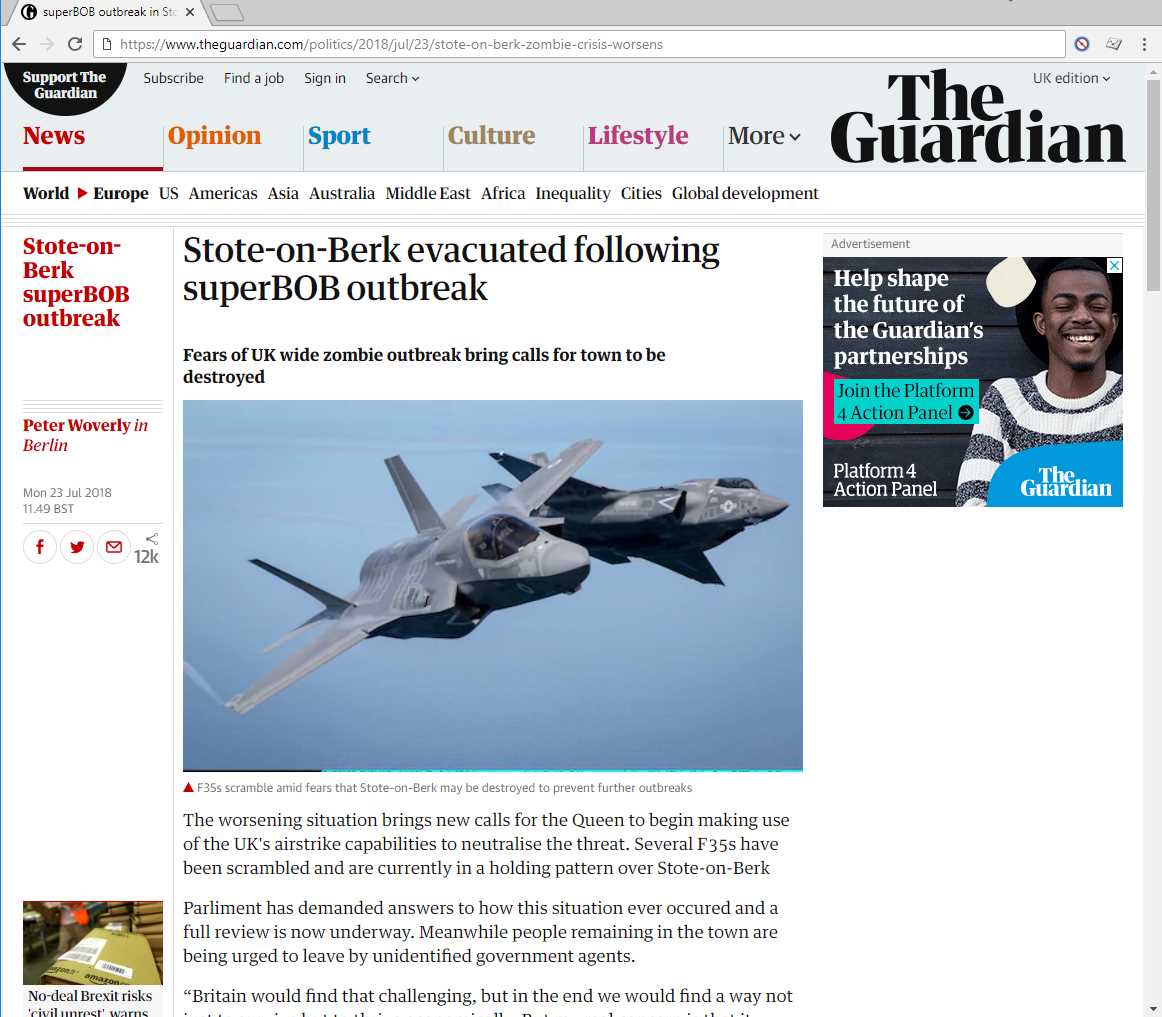 A recently posted article from the Guardian (https://www.theguardian.com/politics/2018/jul/23/stote-on-berk-zombie-crisis-worsens) has confirmed that the town of Stote-on-Berk will indeed be destroyed. As the last of our crew pull out from the scene of the infection we can already hear aircraft approaching. This is very likely the end of the beautiful and historic town of Stote-on-Berk. As is usual with operations of this kind, it is likely that all mention of this town will be removed from the world. Websites taken down, tourist groups dismantled and library books burned. With an issue as politically sensitive as a superBOB infection, this only makes sense. Rest assured that zombie clock will ensure that we keep an accurate record of the events as they happened. Our science is more than the match for any form of potential govenment censorship. As well as mentions of Stote-on-Berk the shady government agents, who have been following us incessently since we landed, have informed us that it is likely all news articles and videos purtaining to this outbreak will also be destroyed. It is your job ,citizen, to spread the word of this outbreak in case this happens.There are several ways you can do this: 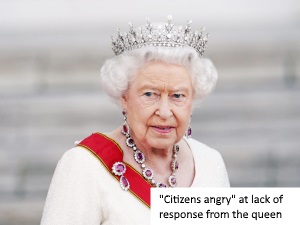 The outbreak situation in historic Stote-on-Berk is developing with our scientists on the ground reporting mass evacuations of the town and the surrounding countryside, sea and air. So far no official word has been sent from her majesty Queen Elizabeth, the monarch of the United Kingdom.The unruly citizens of Stote-on-Berk are angry at this lack of communication from the crown, however they are still willingly evacuating. Several shady government agents, carrying high powered weapons and dressed all in black, are helping to convince citizens of the need to evacuate. The streets of Stote-on-Berk are gradually clearing out, leaving the once lively hamlet a ghost town.

Media, scientists and shady government agents are now the only people remaining in the town centre. People are jumpy as noone is exactly sure how big this outbreak is, or even how many are still infected. What is sure however is that this is one of the largest zombie outbreaks of all time and it is only by the good fortune of the forewarning provided by Zombie Clock that the town was evacuated in time

Cause of the outbreak 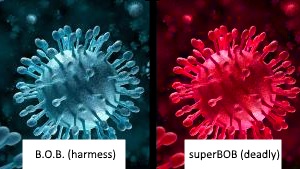 It has been confirmed that the initial infection vector was by means of a contaminated shipment of the traditional british beverage, Buckfast. This shipment was contaminated with a mutated strain of the common (and harmless) Borriathum Orando Ballethius (B.O.B). 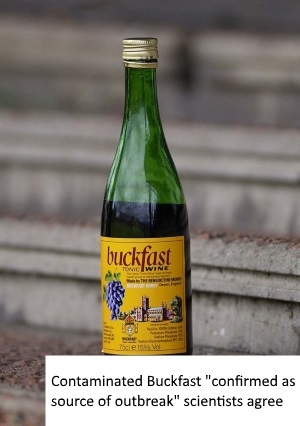 The mutation appears to have occured due to several of the key ingredients of Buckfast. Buckfast itself is a British drink commonly sipped at formal dinners as part of the 4th course (known as second desert). The drink is said to give people a sense of enourmous energy and well being as well as being a traditional digestive aid. Unfortunately it appears to also interact with the normally harmless B.O.B. turning it into "superBOB".

superBOB is extremely dangerous. Exposure to superBOB can produce some worrying symptoms:

Although this interaction is rare, worryingly it appears that certain elements of the British government have been aware of this for some time, even making moves to ban buckfast due to "aggressive behaviour" allegedly caused by the beverage. Its looking more and more likely that this "behaviour" was caused by mild superBOB exposure. The real questions now on everyones minds now are:

Concerning questions indeed. As always we will bring you the latest news as it develops. Due to the nature of this outbreak we suspect that some news sources may be suppressed by various world governments. We will strive to bring you this important information as it occurs. 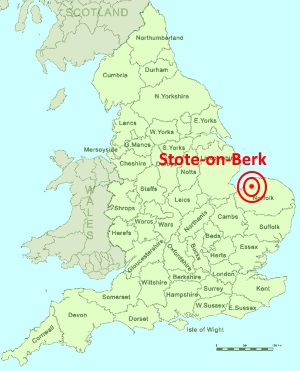 20th July 2018 will forever go down in history as the day the zombie clock counted to zero! People around the globe have been watching the countdown with bated breath. The scandalous claims that the clock is "fake" or "a joke" have finally been laid to rest. Science has been at work and the clock predicted, with pinpoint accuracy, a zombie outbreak in the UK. Please do not hesitate to spread the word of the zombie clock, which our scientists have spent decades perfecting.

What we know so far

There has been a zombie outbreak in the remote town of Stote-on-berk , located in far North Norfolk. The historic town, best known for housing the famous author Arthur Buttington, is home to just over 500 people and already we fear this latest outbreak will cause mild to severe stress to tens of thousands, if not millions. Please join zombie clock in wishing the inhabitants of Stoke-on-berk well and above all urge them to drink plenty of water.

This latest outbreak vector appears to have started with a mutated bacterium. We have recieved a sample of this bacterium and have determined it is a mutated strain of the common (and harmless) Borriathum Orando Ballethius (B.O.B). How this mutated strain of B.O.B was introduced into the general population is still uncertain, however according to sources on the ground this was potentially present in a batch of contaminated "Buckfast", a traditional British beverage.

Scenes on the ground 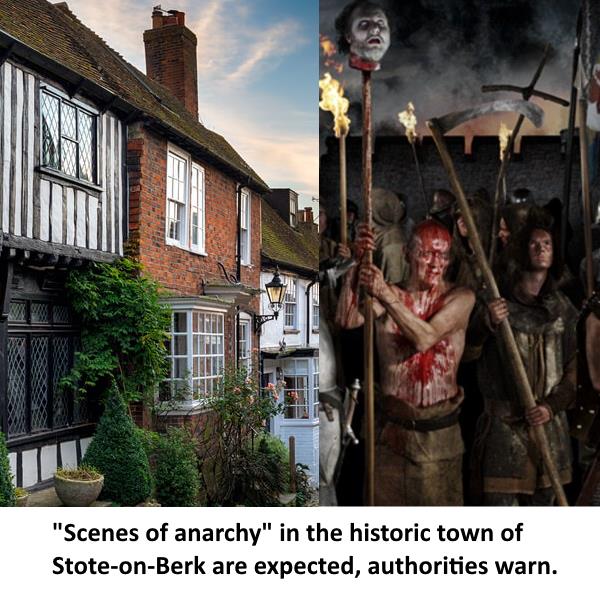 Stote-on-Berk is usually a quiet town, a place of peace and beauty where everyone knows each other. This is a town which is chiefly known for its love of afternoon tea and the fine sport of croquet. Today however the mood is one of unquiet. A single penny farthing (a traditional British mode of transport) wheels slowly down the usually crowded thoroughfare.

Our team on the ground has been investigating and collecting samples from the town as well as questioning locals. The local people seem dazed and even confused by our careful interrogations, this is likely due to low level B.O.B infection. Typical responses include: 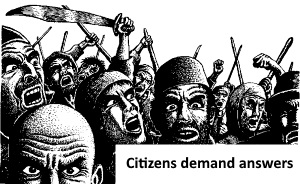 What we are getting from the locals right now is that they want answers. How did a zombie outbreak occur here? Where are the zombies? What is the government going to do about it? These are questions that zombie clock is here to answer.

Much of the town has been cordened off and there are many non locals in the town, news crews and various government officials. It appears that other agencies have been paying attention to the science of the zombie doomsday clock and although their science is far far far inferior to ours, we nevertheless appreciate the help

There has some disquieting talk of "wiping the town off the map.... just to be sure". We are sure this is simply a joke. Officials are however scared that the scene will devolve into anarchy at any moment.

This is a developing story. Check back reguarly for updates.

For questions and comments please mail our press team at ash@zombieclock.com